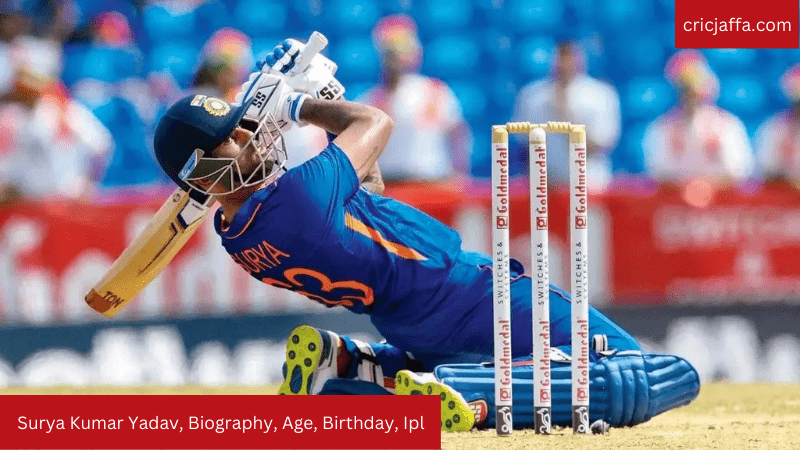 Friends, India is a country where cricket is considered a religion, there is no dearth of cricket watchers, nor the dream of cricketers to play in the blue jersey is found in every eye, but someone’s caravan is limited to domestic cricket only. If he can go, then no one even gets a chance to play Ranji Trophy.

But if you have talent and you believe in yourself, then your dream will definitely come true one day. Bravely proved that sky is limitless but due to selectors’ mismanagement and carelessness his career took off at that stage of age

When ordinary players start thinking of retirement, but when they got a chance, their glory shone in every corner of the world and for them, Virat agreed to give up his number three spot, by now you must have understood that we Indians Talking about the shining Suryakumar Yadav of the team, he is also called by the name of sky.

Surya Kumar Ashok Yadav was born on 14 September 1990 in Mumbai. Sky was very interested in cricket and badminton since childhood, although he belongs to Varanasi in Uttar Pradesh, but when he was young, his father was employed in electrical engineering. Surya has shifted to Mumbai, try his batting tricks in the corridors of Mumbai

When Surya was a few years old, seeing his love for cricket, his father enrolled him in the cricket camp of Anushakti Nagar, after that Surya enrolled in the Cricket Academy and from there he started playing group cricket for Mumbai, continuously in S group cricket. A prolific performer, Surya made his first-class debut in the 2010 Ranji Trophy for Mumbai.

And in his very first match, he played an inning of 73 runs and he was the only batsman in the team to score a half-century.

His IPL journey began when he was first signed by Mumbai Indians in 2011 but he did not get to play any matches as time went on Surya’s stature grew and he continued to score runs in the 2011-12 Ranji season. thundered and scored a double century in only his third match

While he scored a century in the next match, he was the highest run-scorer for Mumbai, not only this, he also got the account of Best Under 22 Cricketers, scoring 1000 runs in just 11 first-class matches, where he won the MA Chidambaram Trophy, but his IPL career started been disappointing

Got a chance to play only one match in the IPL where he could not even open the account. It was a lackluster year for him where he managed only 73 runs in six matches but Surya finished as Mumbai’s top three run scorer in the 2013-14 Ranji season. Proved that it is not just a call message Surya became the captain of the Mumbai Ranji team in 2014 but later lost the captaincy due to some tussle with Shardul Thakur

In IPL, he was signed by Kolkata Knight Riders for ₹70,00,000. So far, Surya, who has played only one match in 3 years, gets a chance in KKR mostly in the lower middle order at number 6-7, playing only 10-15 balls. Neither he would have got to spend more time at the crease nor the platform due to which his career could not go ahead.

His brilliant innings of 46 runs in 20 balls in the IPL created a furore, which included five sky-high sixes. He became the vice-captain of KKR and remained with the team till 2017, but he could only score 100-150 runs in every season in domestic cricket.

Despite scoring runs, he was ignored and because the talent of players in India is measured only by IPL and neither Surya gets much opportunities, due to which these 5-6 years of his career were full of ups and downs but despite all this, bad Surya did not give up even in time, believed in himself

SKY was signed by Mumbai for 2,00,00,000 Till now the audience who considered Surya as just an average player, his career was about to change completely Mumbai Indians coach Mahela Jayawardene worked hard on him to make gold into kundan I have to work hard for it, just like the sun started all over again by working hard

Where he first lost weight while working on his fitness and also improved his skill in his game, earlier he used to play shots behind the wicket mostly using pace, he increased his range, now he not only plays shots in front but also He started playing 360 and made the weakness of the off side his biggest strength.

The management of Mumbai Indians and Rohit Sharma fed Surya as an opener after the first two matches and from here he never looked back.

Sky scored 512 runs for the first time in this IPL He was Mumbai’s top scorer In an interview he said that he always wanted to be a different player Wanted to play different innovative shots He wanted to play 360 degree field not just one dimensional player Wanted to score runs around, then it started coming true. From the cover drive to the top of the keeper, there was no such shot that Surya could not play.

In 2019, Surya became the permanent number three batsman, he scored 424 runs for the champion Mumbai, now he has become a famous player, there is talk of his selection in the Indian team many times, but he was not getting a chance, then the extent was When in 2020, despite scoring 145 runs at an average of 40, his name did not appear on the tour

Due to which Surya was very disappointed, despite performing continuously for 4 – 5 years, he was very sad not to play in the Indian team, repeatedly judged by the selectors or justice was a crime, which wasted a valuable time in the career of a talented batsman, do not select him. Mumbai Indians and RCB had a match the very next day of departure

The match reached its climax when Virat was seen troubling Surya, if any other player would have vented his anger for so long but Surya responded with his bat and won the match and scored a run and celebrated in the style of Shah Rukh Khan, for which matches always remembered

His innings was a slap on the face of the selectors.

Eventually, Surya’s name came up in the T20 and ODI series against England in 2021 and that day arrived. He was selected in the second T20 against England. He didn’t get a chance to bat and was dropped in the next match.

After this, playing his first ball in the fourth match, Skye proved it by hitting Jofra Archer’s 144 speed ball for a six. I can hit any ball anywhere, also became the first player to do this feat. Innings became the man of the match, after which Virat Kohli went so far as to say that he was even ready to give up his number three position to Surya.

This time he got a chance to make his ODI debut against Sri Lanka and is the man of the series in his first series, although he was also selected in the Test squad many times but till now he did not get a chance to play. became an integral part of the team and

He was also selected in the 2021 T20 World Cup, followed by the man of the series in the T20 series against the West Indies. His form continued in IPL 2022, although he could play only a few matches, after which he got injured a while ago. Chasing 216 in the third against England, when India lost three wickets for just 30 runs, no one expected India to come close to the target.

But Surya’s amazing innings of 117 runs won everyone’s heart even though India lost the match by 17 runs but Surya is in everyone’s heart and is currently playing as opener in the third match against West Indies Sky retired Rohit Sharma He played a good innings as soon as he got hurt, so that India won the match easily. Friends, even though Suryakumar Yadav has played only 13 ODIs and 20 matches for India, but his batting was excellent.

He plays with this confidence, this definitely solved India’s number four problem as well. Surya’s strike rate of 176 in T20 is also the highest by any player.

Never giving up, Skye never gave up his hard work and credits his success to his closest friend, Rohit Sharma, who looked up to him and always inspired him like an elder brother even in bad times. It would not be wrong to say that Rohit Sharma is the first person. He was the only one who recognized Surya’s talent and had tweeted in 2011 itself, which is quite viral these days and is also becoming true, Suryakumar Yadav, one of the great batsmen of the world, who proved that those who try never give up