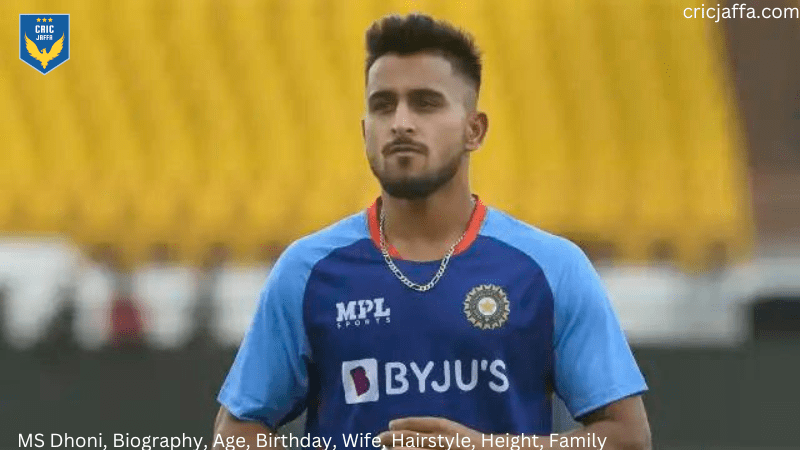 Umran Malik bowled the second-fastest ball in the history of IPL at 157 km. Played tennis till the age of 17. Played a lot of cricket only after 1 year of picking up the leather ball. No player could participate in the U-19 state team trials without making it to the district level but still, Umran came to give the trial, bowled the first ball, came to him, and said, don’t worry, you are in the team, just your keep you ready

Umran Malik was born on 22 November 1999 in Gujjar Nagar, a small area of Jammu city. Umran’s father Abdul Rashid Malik has a fruit and vegetable shop at Shaheedi Chowk.

Like every child in India, Umran used to play a lot of cricket with a tennis ball in his childhood. He used to do only cricket while awake while sleeping, from the beginning he used to do fast bowling.

Father always used to tell him that you should pay attention to your studies along with sports, but Umra could not understand anything other than cricket, as a result, he failed in Tenth. Till the age of 17, Umra played a lot of street cricket, he used his fast bowling. Had the power to lick all the batsmen from

Umran thought of taking his game to the next level, he started playing competitive tennis ball tournaments. Everyone was shocked to see Umran’s pace, all the teams wanted him in their playing 11. Slowly people all over Jammu started knowing Umran because of his fast bowling.

After making a name for himself in tennis ball cricket, he decided to try leather ball cricket. In his very first local match, he surprised everyone with his fast bowling and long sixes. Umran’s friend encouraged him to improve his skills. told to go to a coach

Umran went to coach Randhir Singh Manhas at the Maulana Azad Cricket Stadium and asked him for permission to bowl. Manhas was a local coach who used to train young cricketers. It was morning and as usual there was a shortage of bowlers. can throw the ball

Umran had just bowled a few balls when senior J&K cricketer Ramdayal came there after seeing the net, Dayal ji asked Manas ji, who is this, Manhas ji said, he has got the talent and is comfortable at the speed of 135-140. throws hair

The coach asked Imran to come to the stadium everyday, he liked Umran’s natural talent, just had to work on jump and landing, later Irfan Pathan, when he came to Jammu and Kashmir, he also helped Umran a lot. Abdul Samad, who played in the same ground. He and Umran used to practice and became good friends. Both used to train together. Umran’s career was not on track yet.

When umran no selection

When he went for Jammu and Kashmir Under 19, he was clearly told that without playing district, you cannot take part in the team, but still Umran came to give trial the next day, he said that in such a crowd, it would not be known that I played district. Umran bowled just one ball and the selectors came to him and said don’t worry you will be in the team just keep yourself ready In the first match, when Umran bowled the first ball, it bounced and went over the keeper.

The umpires asked whether he had played the national game. Next year, Umran was rejected in the U-23 trials.

The 2019–20 Ranji Trophy season saw a turning point in Umran’s career when Assam coach Ajay Ratre, a former Indian wicket-keeper, asked for some net bowlers to practice with his batsmen. Umran took the responsibility but after bowling just four balls Only Ajay stopped Umran, you are bowling so fast, the batsmen of the team can be injured.

Ajay Ratre was surprised to learn that Umran is not in the senior J&K team. He spoke to the J&K team captain and the coaching staff. Abdul Samad, who was part of the team at that time, also informed his coaches about Imran. Told later Umran was included in the team but he had to wait more to make it to the playing 11.

In 2020, Abdul Samad was included in his team by Sunrisers Hyderabad, in relation to his management, suggested Umran to be included in the team as a net bowler and showed him some videos of Umran, impressed by Umran’s fast bowling, the team made him a net bowler. joined the camp

Once during a net session, Johnny Bairstow asked him to bowl a little slowly but Umran did not understand English, even after that he only bowled fast. Someone came and told him that the best ball is asking you to bowl slowly speeding up

In 2020 IPL, Umran impressed everyone with his page in the nets, due to which he was the net bowler in the team in 2021 as well.

In the second leg of the IPL in September 2021, he received a call from the State Cricket Association, he had to report for the Syed Mushtaq Ali Trophy T20 but the same evening, the Hyderabad team included Imran in the team in place of Natraj Hyderabad in the year 2000 Umran got a chance in the playing 11 after being out of the playoff race Made his IPL debut on 3 October 2021 against Kolkata

Imran bowled just three balls and the whole of Cricket in Gold started asking who is this boy. In his very first over, Umra bowled the ball at a speed of 150 kms. was the second fast ball of the season

Captain Virat Kohli of the Indian team at that time praised Umran and included him in the net bowler Indian team for the T20 World Cup. also worked on length

International cricketers are now saying that Umran Malik is the best find of India, he just needs to pay a little attention to his economy, nothing can stop him from becoming the best fast bowler in the Indian team.

So this was the story of a player who did what he loved fast bowling, he never started fast bowling thinking that I want to play India, he only wanted to do fast bowling and he is still doing the same inside Umran He was a talent, people around him recognized it and improved his skill and today whatever he is in front of the whole country, we break him. Emerged as the Next Big Thing