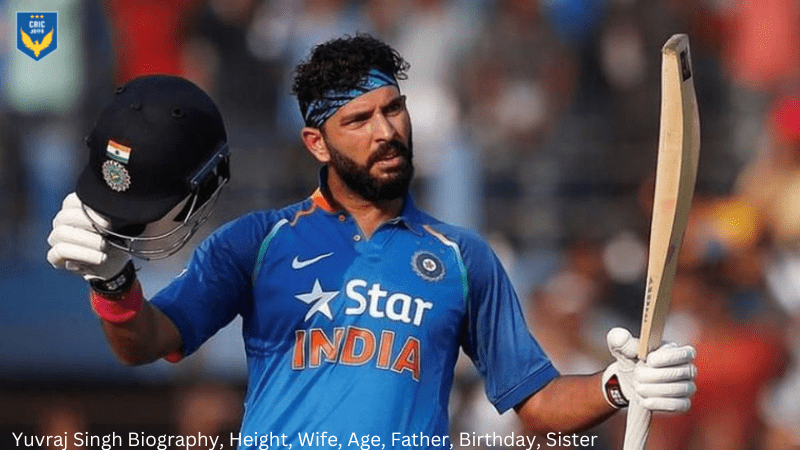 India’s score was 90 for three in 8.4 overs. A top-order full of veteran batsmen like Sachin Saurabh and Rahul Dravid had collapsed. Playing in his second international match, 18-year-old Yuvraj Singh came in front of the strong bowling attack of the Australian team. The youngster played a blistering inning of 84 runs and won the match by 20 runs for the team.

After the 2011 World Cup, when he was at the peak of his career, then at the age of 29, he got cancer, that disease can break anyone completely inside, but the one above was writing a story, a story that has haunted humans for centuries. Inspire Yuvraj Singh to beat cancer and come back in the Indian team and score the highest score of his ODI career

future of father in son

When Yuvraj was born, the father felt that his unfulfilled dream would now be fulfilled by his son.

From the age of 7-8, father used to train Yuvraj with leather ball, mother used to say that the child is still small, it will get hurt, but the father did not stop.

Yuvraj was not very interested in cricket, he liked indoor games more, especially skating. At the age of 10, he won the National Under-14 Roller Skating Championship.

Father threw away the gold medal he got in victory and told him to focus only on cricket. Once Yograj took Yuvraj to Maharani Club of Patiala, where Yograj asked his friend Navjot Singh Sidhu, just look at me and tell me how my son plays cricket.

Seeing the batting of Yuvraj, Sidhu said that this boy is not made for cricket.

Father started training more interest from Yuvraj. At the age of 11, he used to get batting in front of fast bowlers without helmet. If seen, father was very strict, he had a stubbornness to fulfill his dream through Yuvraj. people and even Yuvraj felt that something was wrong with him

But the seed sown by the father and the hard work of Yuvraj gave the Indian cricket team two World Cup wins.

Yuvraj did his schooling from DAV Public School, Chandigarh. Very soon, he started playing junior level cricket. At the age of 13, Yuvraj was playing for the Punjab Under-14 and Under-16 teams, and gradually he also started liking this game. Yuvraj scored 279 runs in the match against Jammu and Kashmir Under-16 in 96 season, 65 runs more than the total score of both innings of Jammu and Kashmir team

For better training facility, father brought Yuvraj to Mumbai in the year 1995, got him admitted in the Vyang Sarkar Cricket Academy and asked his friend Dilip Vengsarkar to pay attention to Yuvraj. In Mumbai, Yuvraj lived in Andheri and the academy was at Church Gate every morning. He had to take that heavy kit bag to the academy by Mumbai’s local train. In the initial days, seeing such a crowd, Yuvraj used to get upset.

But despite so many troubles, there was not a single day when Yuvraj did not practice. He was included in Punjab Under 19 but Yuvraj was not playing to the full potential of his talent, his performance was not good.

Made his first-class debut against Orissa in the 1997-98 Ranji Trophy. He was out for zero while opening the innings. He needed a big performance. This performance came in the final of the 1999 Cooch Behar Trophy. Shots na khela ho Yuvraj scored 358 runs in that match against Bihar in Jamshedpur

He was included in the senior Indian team for the 2000 ICC Knockout Trophy. On 3 October 2000, in his ODI quarter-final match against Kenya, the Indian team’s top-order collapsed against Australia. In One Day Internationals, Yuvraj scored 84 against a Brett Lee McGrath-led bowling line-up to take India to a respectable total.

Due to which the Indian team won the match by 20 runs.

Someone gave the world a player who became an inspiration to people with his fighting spirit both on the field and off the field.

2002 Natwest Series That 121-run partnership with Mohammad Kaif helped India win this historic match at the Mecca of Cricket, Lord’s.

He made his Test debut against New Zealand on 16 October 2003. Yuvraj did not dominate Test cricket which was in the wide ball format. You can guess from this that when the T20 World Cup was played for the first time, Yuvraj Singh scored 12 balls. Scored a half-century, hit a bowler like Stuart Broad for six sixes, won the Indian team the first T20 World Cup

After winning the 2007 T20 World Cup, Yuvraj Singh was considered a specialist of the white ball, that too as an all-rounder, he was consistently performing badly in Test matches, but along with the vice-captain of the wide ball, his performance improved day by day. got better

You must remember that match against England played at Rajkot in the year 2008. Yuvraj batted despite having a backache, Gautam Gambhir was his substitute runner. In that match, Yuvraj scored 136 runs in 78 balls. After these performances, injuries and fitness issues his form continued to decline due to

His form was not good even in the series against South Africa in late 2010. On the same tour, he noticed that he was having trouble breathing but got busy preparing for the 2011 World Cup that he ignored his illness. Said the World Cup is necessary right now, a big player is made for the big stage, despite returning from bad form, Yuvraj got four Man of the Match and Player of the Tournament awards in this tournament

In the match against West Indies, he vomited blood several times while batting, the umpire asked, “Are you fine now, would you like to go out?” carry but till then i will play

Taking three wickets with an economy of 4.4 while bowling in the match against Australia and scoring 57 runs in the batting, India won the match by five wickets, partnering with Dhoni in the final against Sri Lanka, India won the World Cup after 28 years 29 years Yuvraj was still at the peak of his career at the age of 15 years but the pen of the above was writing a different story.

India won the World Cup, but during that celebration, when the players were on top of each other, Yuvraj Singh, who was buried below, was having difficulty in breathing, at that time he could have died even now, he did not take that disease seriously. West Indies and England went to play matches after the tournament

At the end of the year 2011, when he got a good checkup, he had a cancerous tumor in his lift leg, the doctors said that you have only six months, you have such a disease that breaks a person inside, but Yuvraj Singh is a fighter, he went to the US and got treatment. He came back to India after recovering completely with prayer and medicine.

Doctors said that it will take two to three years to regain the same fitness. Yuvraj started training and made a comeback in the Indian team after just five months. He made a comeback but was not able to bat according to his standard. In the T20 World Cup final, he scored only 11 runs in 21 balls. Everyone started saying that Yuvraj should retire, but Yuvraj never lacked in hard work. would have saved for

After recovering from cancer, Yuvraj opened a non-profit organization named YouWeCan to help cancer patients get treatment. In the year 2015, he expanded YouWeCan and when everyone thought his career was over, he scored 150 against England in January 2017. Run Mara made his highest score in ODIs

Retired from all formats of International Cricket on 10 June 2019