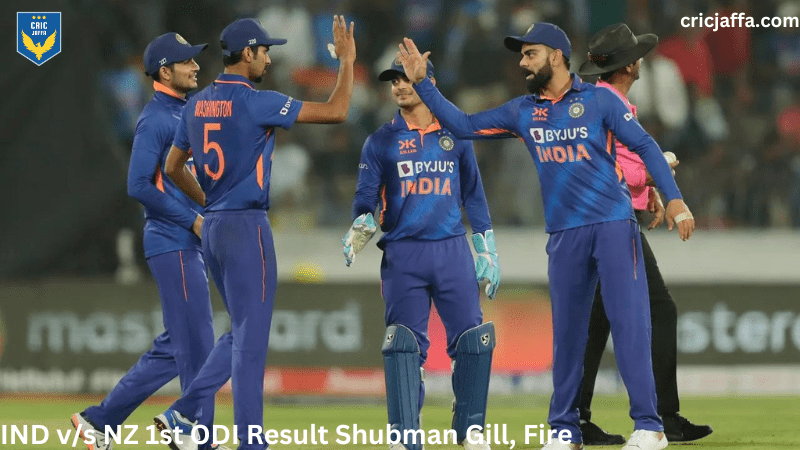 If we talk about Bharti batting, then India started well while batting first, Rohit Sharma got out after scoring 34 runs, after that Shubman Gill, who came to open with him, handled the innings and scored the first double century of his career.

Shubman Gill played a brilliant inning of 208 runs Shubman Gill faced 149 balls to score 208 runs in which he hit 19 fours and nine sixes Shubman Gill shot all around the ground during his innings none of the team except Shubman The player could not score much, Shubman single-handedly brought the team to a good score, due to which the Indian team won the first ODI.

MICHAEL BRACEWELL scored the most runs for New Zealand and due to his batting, New Zealand was able to get so much cream of India’s target. MICHAEL BRACEWELL played an inning of 140 runs in 78 balls. MITCHELL SANTNER scored 57 runs in 45 balls and scored seven fours and a six. FINN ALLEN gave the team a good start and contributed 40 runs. scored in and also hit seven fours and a six

Blair tickner natak on one score in one ball

New Zealand have given total runs extra and in it 14 wide balls and five runs have gone to leg bye.

Mohammad Siraj was the most successful bowler for the Tigers, who bowled 10 overs and gave 46 runs and took four wickets, taking two maiden overs.

Hardik Pandya has proved to be the most expensive bowler from India, conceding seven runs in seven overs and dismissing one player.

Henry Sipplen was the best bowler for New Zealand who bowled nine overs and gave away 74 runs and took two wickets.