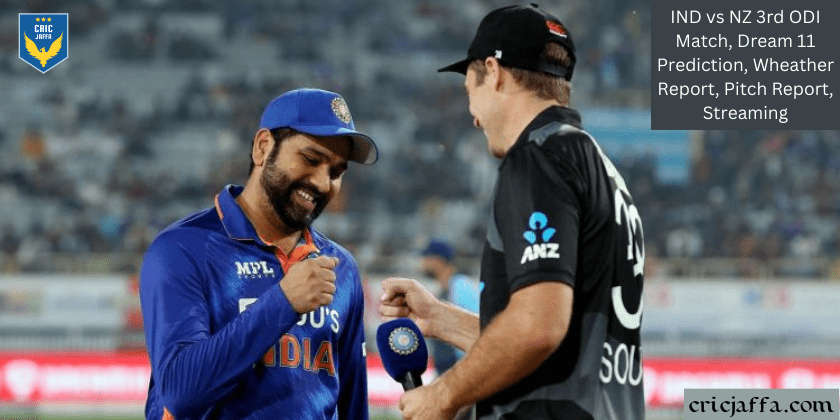 The last match of the ongoing 3-match series between India and New Zealand will be played on Tuesday. If we talk about the series, then India has already captured the series by winning two out of three matches in the series, so the Indians will have to play the third match. The morale of the team must be touching the seventh sky

The India team played under the captaincy of Rohit Sharma in this series and all the players of the team showed a very good game, due to which the Indian team was successful in winning the series, chasing India’s 349 runs in the first match,

New Zealand performed very well. Seeing the commodity, it seemed that the three-match series would prove to be an exciting series, but in the second match, the bowlers of Team India, who were running in their tremendous form, bundled New Zealand out for 108 runs in the second match and easily captured the series. have done

In the second match, India’s bowlers bowled brilliantly, with Mohammed Shami taking three wickets and Hardik Pandya and Washington Sundar taking two wickets each to prevent New Zealand from scoring a big score, due to which the entire New Zealand team was bundled out for just 108 in 34.3 overs. could only score runs

In the second ODI between India and New Zealand, New Zealand had a very bad start and five New Zealand players were dismissed in 10 overs when New Zealand’s score was 15 runs.

On the other hand, when the Indian team came out to chase the target, they got off to a very good start, captain Rohit Sharma scored an inning of 50 runs and Shubman Gill, who came to open the innings with him, scored 40 runs in 53 balls without being dismissed. got it

For the third ODI between India and New Zealand, the pitch is considered very good for batting, it can be said that a big score can be seen on this pitch, the Indian team has already captured the series, there is no reason for this.